Blackstone District Then & Now: What You Don't Know 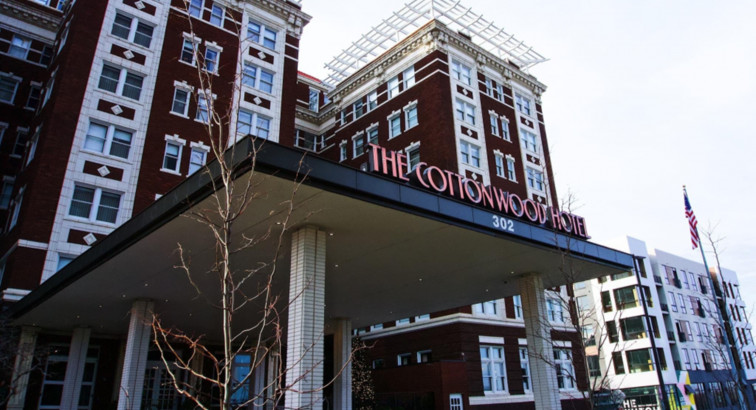 Blackstone District is a modern revitalization of one of Omaha’s oldest neighborhoods. This oasis of classic cocktails, historic hotels, and decadent dining runs from 36th Street to 42nd Street along Farnam Street, nestled between UNMC and Midtown Crossing.

The past decade has seen enormous developmental changes to Blackstone’s landscape, but with Omaha Chamber’s new Urban Core Strategic Plan and the city’s proposed Streetcar running directly through the district, we are sure to see new restaurants, shops, and housing options pop up every year. Below are some of the most exciting new changes Omahans can look forward to in the next year!

The birth of the Reuben sandwich is not the only national event to happen in Blackstone; Richard Nixon announced his presidential campaign and the Kennedys celebrated their fifth wedding anniversary here as well! This neighborhood started in the “1880s when families migrated from South Omaha and constructed large brick homes in what was then considered to be West Omaha.” Many of the beautiful homes of the early 20th century are still standing including the Charles E. Metz Residence, the Gottlieb Storz Residence, and the Charles D. McLaughlin building. Next to them, you’ll find some of Omaha’s best and newest restaurants, bars, and entertainment sites!

Omaha’s plan to develop downtown districts stems from a desire to prepare our city for massive growth in the next decades. Our rich history and culture has attracted almost 1 million residents, but many areas were overlooked by developers in favor of pushing the suburban frontier to the West. This left many historic neighborhoods underutilized and underdeveloped, but as this western frontier dwindles, Omaha now turns to the crucial urban core for the continued growth and success of the city.

According to Omaha Chamber, “since the 1963 Downtown Plan, studies based on census data show that the downtown area lost 21,000 jobs rather than gaining the 12,000 jobs the plan projected,” and this great push to redevelop historic districts has lead to updates in Gifford Park, Gold Coast, Blackstone, Old Market, Midtown Crossing, Millwork Commons, River’s Edge, and The Builder’s District, among others. The Chamber’s Urban Core Committee aims to create 30,000 jobs and attract 30,000 new residents in the next 20 years. Blackstone District’s new redevelopment push will contribute to that shared goal. Read more about these updates below!

Blackstone Parking, LLC is tackling the redevelopment of Farnam and 38th, creating a 9-story building for commercial and residential use. This $43.5 million project is part of Destination Midtown Plan’s vision of “park once” districts where you can enjoy all the activities of Blackstone within a walking distance of Blackstone East. The 6 apartments at 3710 Harney Street were also demolished to make room for a parking garage with 384 stalls, replacing the free public parking lot across from Dundee Bank. Alley Poyner Macchietto Architecture, who recently worked on Millwork Commons, is designing the core and shell, creating a modern, functional, and beautiful space that blends with the historic environment of the Blackstone District in Omaha.

The corner of Harney and 40th will be the new home of Bärchen Beer Garden’s second location. A vacant single-family home was recently demolished to make room for a 3,500 sq ft restaurant, a 4,000 sq ft outdoor beer garden, and a 3,000 sq ft event space called Holm. This development will also have a rooftop portion where you can enjoy a beer and overlook busy Farnam Street restaurants and bar-goers. At this new location, “Patrons can expect a larger wine list and more cocktail offerings and a different food menu from the Benson location.” According to manager Ryan Miller, the rest of the details are still a secret!

Blackstone Square is a mixed-use development on 38th and Farnam just completed with the help of Blackstone Real Estate, LLC. According to the city planning documents, “A two-story commercial building of about 11,000 square feet will be constructed on the newly cleared site. The building will have 4,400 square feet on the main level and about 6,600 square feet, including a patio area, on the upper level. There will be four tenant bays, each with a second-floor patio. They have been designed for dining/restaurant establishments. The building will have entrances on both Farnam and Harney Streets.” Two retail bays are currently available and looking for tenants.

April 2022 saw the completion of the Blackstone Plaza at 36th and Farnam. This 15-story, 235,000 sq ft masterpiece hosts Class A office space and replaces the Kiewit Plaza. According to their website, “The top floor of the building, originally The Cloud Room, historically served well-known tenants and their guests with panoramic views across the city. Today, The Cloud Room reemerges, gloriously renovated with new indoor-outdoor access, a 360-degree balcony, and a freshly opened view of the northern skyline.” The building also hosts an 8,500 sq ft wellness center, a barber shop, a fuel center, and 850 windows. WOWT Channel 6 moved its headquarters to Blackstone Plaza this summer along with Berkshire Hathaway Corporate and Smith Slusky, LLP.

Other projects coming soon include the renovations of the halal grocery store on 140 S. 40th Street into a restaurant, a new administration building for UNMC and Nebraska Medicine, and 39th and Dodge’s new apartment complex and parking called The View. These new developments will sit beside some of the oldest homes and neighborhoods in Omaha.

Home prices in this area have gone down since 2021, with the median list price at $285,000. Most people rent homes in this community due to the great location and appeal to young professionals, and these new developments will only bring more jobs and housing options to our community. Stop by Blackstone District for a great brunch at Early Bird, Reubenfest at Beer Corner USA, or grab some Coneflower ice cream and take your kids to Clarkson Park nearby. Regardless of what you’re looking for, Blackstone has something that everyone will love, and these new developments will only add to this amazing neighborhood.

If you’re looking to visit Omaha or move to the Blackstone District community, contact Nebraska Realty to get started!