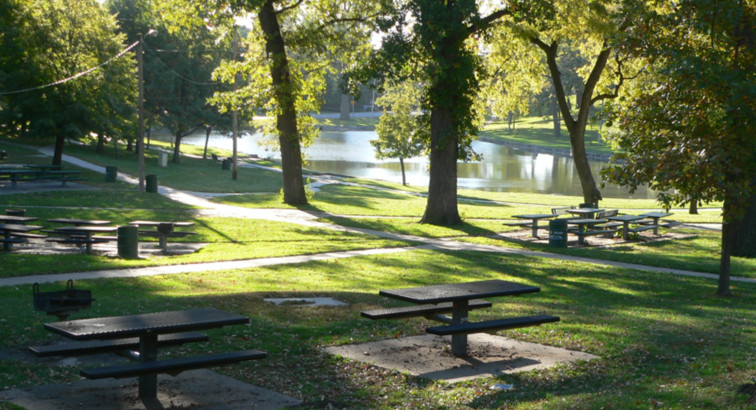 Nestled between South 32nd and Park Avenue, Hanscom Park is one of the most beautiful parks in Omaha. This 57-acre tract is the oldest remaining park in the city, and 2022 marks its 150th birthday! Throughout its many years, this neighborhood has seen great buildings, greenhouses, gardens, and lagoons built on its land, and just as many great fires, tornados, and bureaucratic tragedies destroy these historic landmarks.

The land was first donated on November 7, 1872, by land developers Andrew J. Hanscom and James G. Megeath, as this area was too hilly to be included in their Hanscom Place development. Since then, millions of Omahan’s have come to love this peaceful nature reserve, and this year, we get to celebrate its 150th year as part of our great city. Below are some of the greatest achievements in its long life.

Hanscom Park and the surrounding neighborhood were central to the early development of Omaha and have continued to be a hub for historical figures and important events. Adjacent to the Park, you’ll find Gerald R. Ford’s birthplace and memorial garden, George N. Hicks House, the Field Club Historic District, and Johnston House. The park itself has been home to ice skating competitions, movie screenings, weddings, and countless neighborhood events that have built a legacy of family, culture, and community into the foundations of the park. While the park today is very different from the original design, it still contains some of the same elements that have attracted millions of people over the years.

One of the main attractions of Hanscom Park in 1890 was a “wooden pavilion, slender and graceful, built in the Moorish style, with rounded arches, a pitched roof two stories high, and dormer windows” designed by Canadian architect Louis J. B. Bourgeois. It was burned down three years later and replaced by a larger pavilion overlooking the lower lagoon. Unfortunately, this pavilion also burned down in 1927, and in the 1960s, Omaha built the current pavilion that is still used for parties, weddings, and events today. The history of Hanscom buildings destroyed in fires sadly continued into 2022 when the Hanscom Park gazebo was burned to the ground.

Another hidden secret of Hanscom Park is the city’s greenhouse. Roots of the historic Joslyn greenhouse of 1913 remain, as city employees care for 80,000+ plants in the massive facility at the Northwest corner of the park. These plants are nurtured year-round and, in the Spring, are planted in over 300 city properties such as parks, libraries, and fire and police departments. Before the Winter, they even uproot some of the healthy plants that were distributed in the Spring and bring them back to the greenhouse to live for another year.

The Southeast end of the park supports one of the original features: a large lagoon, currently one of the best fishing locations in the city. In the early 1900s, however, this pond was prime ice skating–promoted and maintained by the city. According to SkateGuard, the Hanscom Park lagoon was ideal: “Protected by huge oak and elm trees, the frozen lake was maintained by the city's park commission and flooded twice a week during cold weather . . . Fires were built on the shore of the lake for warmth, skates were available for rental and the Omaha & Council Bluff Street Railway Company even took out advertisements in local papers suggesting that skaters ‘take a street car’ when ice conditions were favorable in the winter months.”

The lagoon was almost filled in 1946, but Omaha residents raised enough money to clean and refill the pond and add a rock wall around the water’s edge. This 1-acre fishing spot is stocked with Bluegill, channel catfish, crappie, and largemouth bass.

1961 brought a public pool to Hanscom Park which was renovated in the 90s and is now host to aquatics programs, lap swimming, free swim, swimming lessons, and even log rolling events! Hanscom Park continued to expand in 1967 when the city built indoor eight tennis courts–the Hanscom Indoor Tennis Center–which is home to Creighton Men’s and Women’s tennis teams. In 2011, Hanscom Park added a 2.1-acre off-leash dog area. The rolling landscape of the dog park is divided into three separate dog-run areas for small and large dogs. The park remains consistently busy, and the Hanscom Park Renewal Project renovated the playground equipment in 2017.

The most recent Hanscom renovation came in 2020 when they built a 9-hole frisbee golf course that is almost always busy. This beginner course takes you on a 1.5-mile walk through the steep hills and forest groves that have been central to the park for decades. It is one of four disc golf courses in the whole city!

Hanscom Park is closely connected with its surrounding neighborhood and frequently collaborates on events. Every year, the Hanscom Neighborhood Association sponsors Centerfest, a community celebration of local businesses and history full of food, festivities, and fun! Grab a drink from The Bull Moose, play in a cornhole tournament, or enjoy plenty of kid (and dog!) friendly activities during Centerfest every September.

There are several historic homes in the Hanscom Park neighborhood, and most homes are over 90 years old. According to RPR, the average home value is around $206K with over 60% of the residents owning their own home. This area is more affordable than greater Omaha, and has tons of great restaurants and entertainment centers within walking distance! Hanscom Park is one of the most historic Omaha neighborhoods.

Hanscom Park has been a pillar of Omaha for 150 years, and countless Omahans continue to share stories and memories of this beloved place. Whether it's family picnics, fishing tournaments, or just after-school fun, this park continues to spread joy to everyone who visits. Happy 150th Birthday, Hanscom Park!

If you’re looking to visit Omaha or move to the Hanscom Park community, contact a Nebraska Realty agent to get started.